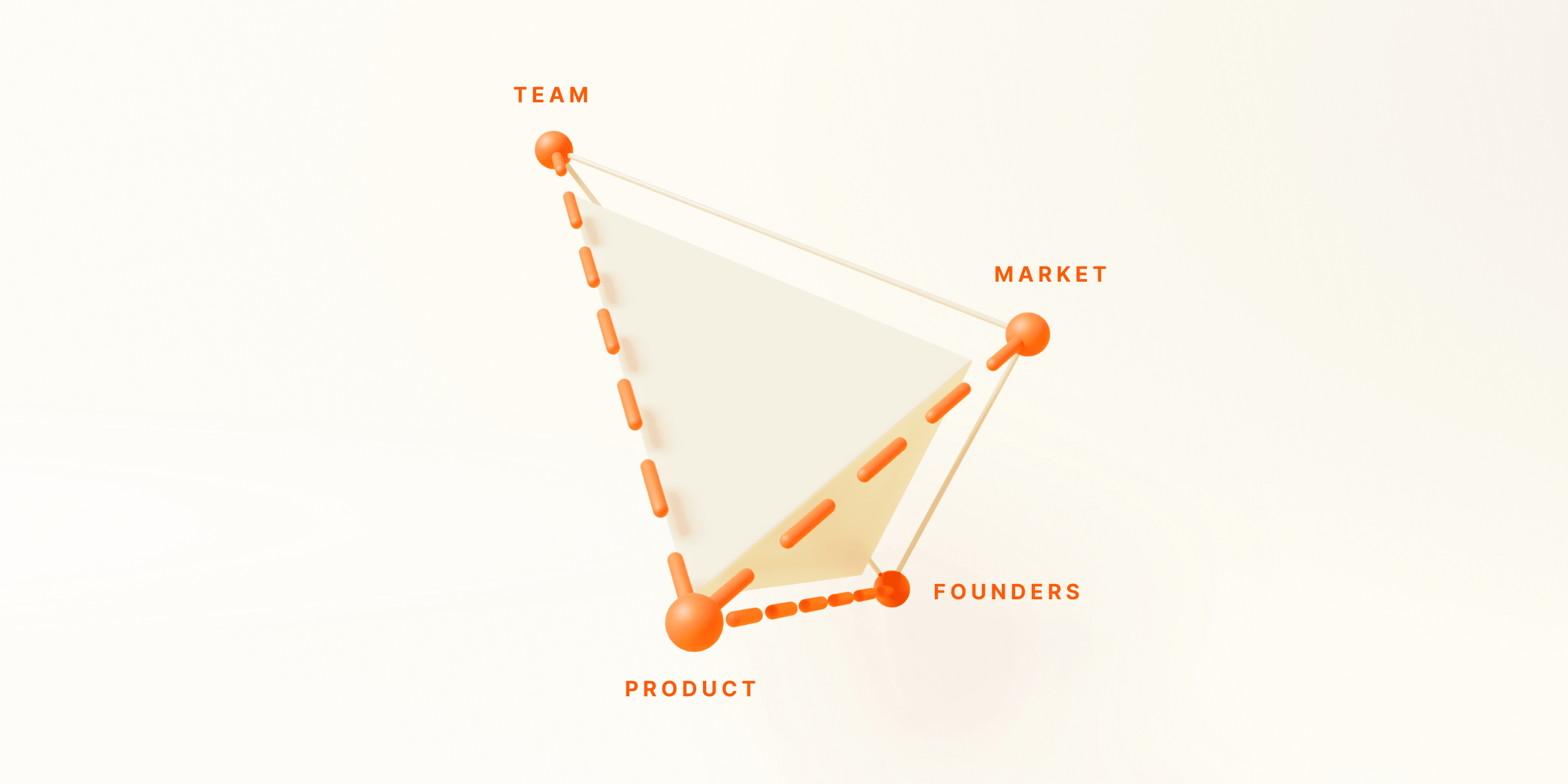 Product/market fit is being in a good market with a product that can satisfy that market (see part one). On the other hand, market/product fit involves observing and analyzing the what, who, and how insights about the market need before crafting the solution. Now that we've identified our targeted users, their core problem, and a value hypothesis for how to address it, let's discuss developing the product.

• Product/market fit is a balance that must be continually evaluated and calibrated.‍

• Designing for product/market fit effectively relies on testing and iterating in a cyclical workflow.

• People are bad at predicting what they want and their future behavior. However, people are good at reacting to tangible things that they can interact with.

How do you test a value hypothesis?

“The science part of it is being clear about what your hypotheses are, what you think is going to work, why you think it’s going to work and really sort of pressure-testing that on a logical level.”
— Mike Vernal, Sequoia Capital

We believe that product development is as much a science as it is an art. As Mike Vernal framed it, although it pays to be data-driven in the logical sense, product is more about being hypothesis-driven. Because of our position as co-designers for early-stage product companies, we spend a lot of time developing and designing ways to test value hypotheses in order to find a minimum viable product for a market's need.

What is (and isn't) a minimum viable product?

Even though the term "minimum viable product" or "MVP" is now commonplace at startups, we make sure to acknowledge what we feel it is and, more importantly, what it isn't with the stakeholders of a new product. The goal of developing a MVP should be to inform, predict, and justify the product's velocity, which is the combination or balance of its speed and direction. Too much emphasis on speed and a product can end up too deep in the wrong direction, while too much emphasis on the direction or positioning can result in over-planning and little execution.

A minimum viable product is the “version of a new product which allows a team to collect the maximum amount of validated learning about customers with the least effort.”
— Eric Ries, author of The Lean Startup.

A minimum viable product is not a product that the team can decide to launch, but instead an achievement that's reached when the market tells you so. A common mistake from early-stage teams is thinking of the early versions or prototypes of the product as the MVP. We view prototypes as a means of discovery, representation of the product's vision, or proof of concept for technical feasibility, all of which can be necessary tools for determining what makes a product viable for a market. A MVP, on the other hand, demonstrates validation by delivering value to a group of users in the same market by solving a problem.

When narrowing down what should be included in the product's early iterations, founders should build for what they've found out users expect and test for what they don't yet know. Traditional methods of building a minimum viable product are a bottom up approach, reducing a product down to only functionality, rather than incorporating all of the necessary attributes such as reliability, usability, and enjoyability. A MVP doesn't have to "do" everything for everyone, but it should be a glimpse of the future solution and address all of these product attributes to some degree. Andrey Gargul, a designer at Shopify, built on top of this method, stressing that not meeting a user's expectations with an early product iteration can ruin trust with users that's hard to earn back.

“'Expectation' is how people believe something should work, while 'want' is their desire for improvements on the current state of things. Coming up short on wants can be bad, but not meeting expectations can be a disaster."
— Andrey Gargul, Designer at Shopify

When's the right time to build a MVP prototype?

As a design-first company, we hear from many teams who are looking to make a beautiful solution for numerous needs within one or multiple markets right out of the gates. Although we love appealing aesthetics and holistic feature sets, we first make sure a product that's in its infancy is built upon what's known of its users, while design acts as a tool to demystify what is unknown about the value hypotheses. With this design-to-test approach, additional features can be strategically prioritized rather than released all at once; saving time and money, while gaining insights faster.

"Usually, finding product/market fit in a category is a function of two or three important things. Identifying those important things and testing them to get clarity around that first, then designing the full product, is way better than just starting with a masterpiece, and then slowly painting over and over the masterpiece until you get to something that is great."
— Mike Vernal, Sequoia Capital

Building towards a MVP is not always the right next step, and a lot can be learned before attempting to develop one. Rather than blindly taking shots in the dark to get initial customers in the door, we encourage founders to think of what can be achieved pre-MVP so their attempts of finding it are greatly increased. Interest or intent-oriented metrics, such as sign-ups or pre-orders, can be pivotal for teams to justify the problem or need that they're hoping to solve before building the full product or service.

A popular method of product validation, coined by Jess Lee, is the fake door test, which has proven to be a cost-effective way to test a product's direction. With Jess's approach, companies can determine and build for the "unknowns" so results can be measured and insights collected, while "faking" the rest such as developing the nice-to-have features, inking partnerships, or completing other tasks that would slow down the process. A common example of this method would be launching a landing page explaining a product with an email collection call-to-action field to gauge interest. Opendoor's founding team utilized the fake door test back in 2013 to better understand if consumers would be willing to instantly sell their homes at a discount, which led to their ability to successfully fundraise and build the true MVP.

What are examples of minimum viable products?

It’s important to remember that what people say they’ll do or what they’d buy is different than what they actually will when the opportunity presents itself. A team should be intentional about the type of product they release early on based on the determined metrics to validate what they think they know and clear methods to harvest insights for what they don’t yet understand.

Alexander Cowan popularized three “MVP archetypes” to align the type of viable product with the level of observational depth and hypothesis validation:

Envision the final product, now take away all tech and replace this idea with a human concierge that can replicate this service. In theory, create the experience you want the customer/user to have without back or front-end technology, and observe what happens.

A front-end or interface that allows the user to think they're interacting with a real product, while the service is really low-tech and being delivered by a human. This type of MVP allows a team to test a target user experience and branding without real working software.

Much like a fake door test, the basic idea with a Sales MVP is to see if you can sell something before you actually have it.

Due to the evolving capabilities of low and no-code tools such as Webflow, Airtable, and Zapier, we’re able to work with teams to rapidly build products in ways that allow us to not only ship and get in front of users faster, but also track and analyze behaviors like we would a live production site. Because of this rapid product development and a team that can evolve as the strategy does, we’ve found the most success with the “Wizard of Oz” and “Sales” approaches. We prefer the “Sales MVP” whenever possible, as it presents clear insights for demand and expectations. Simply put, if a founder can't sell the product (its value) before it exists, they'll most likely still have a difficult time selling it once it does.

Do we have the right product but the wrong channel?

Although we're not primarily marketers, we strongly agree with Brian Balfour when he says that, "products are built to fit with channels, channels do not mold to products". We integrate with those who will be leading user acquisition so that the product's development can be complimentary to its primary channels and leveraged as a strategy rather than an afterthought.

Unfortunately, it happens far too often that founders build what they feel is a great product but when they go to launch it into the market, it's not received how they expected. This is usually due to the product not getting into the hands of their target users with the scalability that the founders had anticipated. A common symptom of the product not conforming to the ideal acquisition channels.

For many, traditional categories for channels include paid marketing, user-generated content (SEO), and virality. It might be tempting to hold off on choosing one until later, but Peter Thiel shared compelling reasoning in his book, Zero To One, for why startups should pinpoint a single focus area for a channel rather than try a whole bunch.

"Most companies get zero distribution channels to work. If you get just one channel to work you have a great business. If you try for several but don’t nail one, you’re finished."
— Peter Thiel

We believe that the process of building a minimum viable product is the ideal time for teams to test what is assumed or unknown about how the product might interact or perform with targeted channels because it greatly influences its chances of success.

In this series, we dive deeper into our approach to achieving product/market fit, the primary "fits" that we hope to balance with our portfolio companies, and our core belief that communication is the key to long-term startup health.

Part One — Our Approach to Product/Market Fit

Thank you
Oops! Something went wrong while submitting the form.